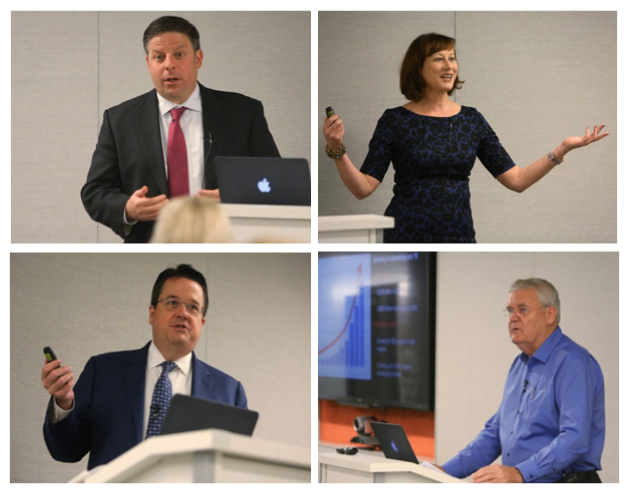 In this report influence strategy guru Alan Kelly reviews some of the presentations at the recent IPR Research Symposium (see the entire roster here). Kelly, the founder and chief executive of Playmaker Systems, LLC, has an unusually clear-eyed and unsentimental perspective on PR. He sees it as an industry skilled at wielding the tools of persuasion strategy, but one reluctant to confront the true nature of its motives and techniques. See, for instance, his post “Fake News: PR’s Little Monster,” where he suggests that the difference between PR and fake news is one of degree rather than kind. Kelly served as an IPR board member from 2003 to 2008. His book “The Elements of Influence” details the first complete ontology of influence.

The recent Institute for Public Relations Research Symposium, held Nov. 29th in New York, was a knothole in the fence that surrounds the cultish and chronically confused public relations and communications industries. Peering in and tweeting out, I had to marvel at the IPR’s clever reflection on the roles and reasons for the functions and their supporting academies. It was a master work of contrasts.

From the private sector came Evan Kraus, APCO Worldwide president and managing director (shown upper-left), who revealed his firm’s secrets to smoothly merge his client, Japanese spirits company Suntory, with the iconic American whiskey maker, Jim Beam. Through the lens of tribalism — the fashionable euphemism for stakeholders, demographics and other terms of targeting — he proved how clever and essentially cloaked the craft can be. Communicate and drink responsibly, my inner-troll nearly tweeted.

What followed was a jarring juxtaposition as Ann Christiano of the University of Florida (shown upper-right) took up the mantle of her preferred frame, public interest communications. By the same plays and techniques of APCO, she quickly proved through an Ogilvy-inspired organ donation campaign how in Brazil a long-held tradition can be expanded for a larger, public good. Whereas one consultancy pulled the levers of foodies and craftsmanship to preempt the upset of stateside whiskey drinkers, another convinced Brazilian football fanatics to donate organs to fellow fans, not just blood relatives.

If the Florida professor was tapping a velvet hammer on propriety, then the next speaker was winding a wrench on reality. Mark Stouse (shown lower-left), whose analytics start-up, Proof, might just as well sport the tagline, Show a return or go home, had the literal money line, “If you (PR) knew the value you’re creating you’d want to charge for it.”

When the capitalist sat, another scholar rose, this time in the form of James Macnamara of the University of Technology Sydney (shown lower-right), who reminded us that listening is a lost competency and those who neglect it court disaster. Look no further than the election of Donald Trump and the Brexit decision, he observed. You might have thought the Aussie professor was toeing the academics’ line of symmetric communication and indulging its professional abuse.

But then he said something truly disruptive. Reflecting on the topic of trust and its alarming declines, he conceded, “If we are honest with ourselves, we need to ask whether public communication [his twist] had a hand in causing the loss of citizens’ and stakeholders’ trust.” This might be heresy to the likes of PRSA, The Arthur W. Page Society and certainly the PR agency giant, Edelman, publisher of the annual Trust Barometer, but it was a rare and well-aimed suggestion.

I almost jumped up, asking, “If you believe that PR is complicit in the trust crisis, could you make the same case for the industry’s role in fake news?” His answer was more a deflect than bear hug, if you follow my system. I was asking too much too soon of his polite call out on PR’s bogus remedies. Even so, Macnamara had proposed the obvious and sanity signaled the day’s end.

More than a decade ago, the IPR found its modern cause: To locate and narrate the science beneath the art of public relations. Now, it’s making good on the mission by moving toward the hard questions. Shall PR and communications shade their methods and motives for profit-based programs? Shall their service to private enterprise require service to public interest, always or optionally? Can there ever be room for PR and communications without the ROI imperative? And, most important, when and how will the industry police its euphemisms, misrepresentations and mistakes?  What, in other words, is the industry here to do, and whom is it best designed to serve? ∞

(Photos sourced from IPR. This post first appeared on The Playmaker Blog.)

Alan Kelly is a visionary strategist, author, professor, political analyst, and award-winning Silicon Valley entrepreneur. He is Founder and Chief Executive of Playmaker Systems, LLC, a strategy and simulations firm. Kelly’s work is driven by a simple idea: That influence – like chemistry, biology, language, and even music – is underlain by a single system of irreducibly unique elements. In this regard, he envisions a modern lingua franca for managers of reputations, brands, and other intangible assets, applicable across industries, governments, and cultures.